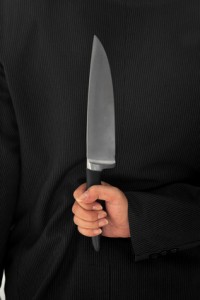 We tend to recognise a psychopath as sensational murderers such as Hitler, Ted Bundy, Charles Manson or even the more recent Joanna Denehey; but do we ever stop to consider that right now in our workplace we might share our coffee breaks with people who could potentially be just as psychopathic?

Experts in the field, such as Cleckley, Hare, Babiak and Boddy have increasingly pointed to evidence that around 1% of the general population is psychopathic, but clearly not all are murderers.  Many are socially adept and fully able to have seemingly gainful employment.  Further, it’s believed that among senior staff and CEO’s the percentage is higher, and if the organisation is reputationally attractive, earning potential is high and the culture favours the macho, then the possibility of tripping over the corporate psychopath is much higher still.

Identified by their complete lack of empathy, lack of moral judgement, desire to succeed at all and any cost in their singular aims, who are good at using others for gain, breaking people who stand in their way and charming those they need to influence, they are a destructive force in any business.

Strangely, some people believe that the traits that so define a psychopath can be harnessed for the good of the business in which they work.  Really?  The fact that a psychopath feels no loyalty except to himself (and yes most are male) means that they will destroy whatever stands in their way in pursuit of the goal they seek; not just turn their psychopathy outwards, for instance toward competitors in pursuit of competitive advantage.  Deliberately hiring a psychopath might be more akin to playing a game of Russian roulette – never knowing when the bullet will come, but come it will… Organisations like Enron, WorldCom, The Mirror Group Pension Fund, and Barings Bank all suffered the ultimate effects of Corporate Psychopaths.

Promotion, money, recognition.  A potent and attractive mix for those who crave attention;  so how can we ensure that we have our eyes wide open to ensuring we hire, promote and trust those who will benefit our businesses rather than bring them down?

Corporate Psychopaths are inherently charming, knowing what to say, and when.  They appear unflappable and in control when all around them is in chaos (often of their own making) they deflect blame on to the innocent, present others’ ideas as their own, will manipulate, lie and cheat, and yet if you are the one they are aiming to influence, they will appear to be the solution to all your business problems.

So on that basis you probably won’t suspect you have a Corporate Psychopath in your midst, in fact you will more likely view them as your key business player and best friend.  Too clever to be easily found out you won’t spot them easily, but the signs will be there and good business practices can highlight when things aren’t all that they seem – if you are willing to look. So what should you do?

If the doubts or questions are there, look at your business and financial metrics, make comparisons over time, look at other employee indicators such as turnover, absence and exit reasons, and start questioning.  If things don’t ‘stack up’ you have identified your problem.